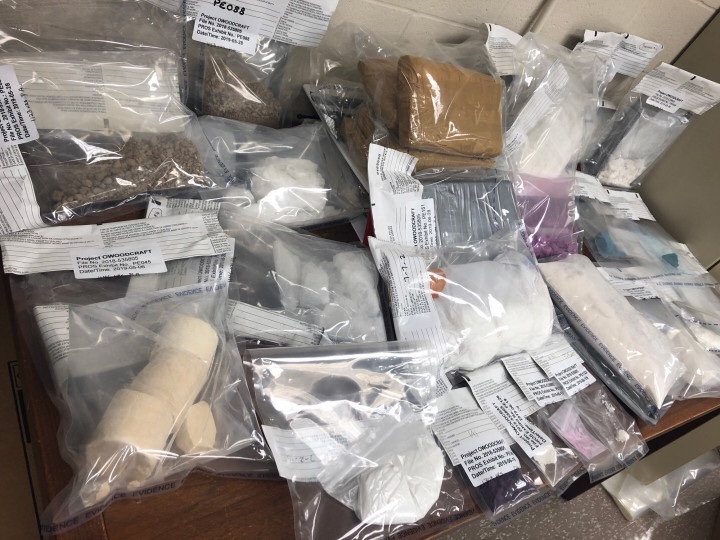 Brantford Police Service was just one of several community law enforcement agencies that helped the Royal Canadian Mounted Police in Kitchener arrest and charge 11 people with trafficking drugs such as fentanyl, cocaine and carfentanil earlier this week.

The RCMP and police officers in Hamilton, Toronto, Durham Region, Kitchener and Brantford raided properties in those communities to arrest the 11 accused and charge them with 40 offences, including no trafficking in fentanyl, carfentanil, heroin, cocaine and methamphetamine, as well as attempting to import cocaine. One of the accused was a Brantford resident.

In an undercover operation dubbed Project Woodcraft, the Kitchener RCMP directly infiltrated several high level drug trafficking groups supplying fentanyl and other illicit drugs to markets in the GTA and Southwestern Ontario. The investigation also uncovered members of a cocaine importation ring working out of the Toronto Pearson International Airport (TPIA). The arrests this week signal the successful culmination of that effort.

The trafficking of fentanyl is a top priority for the law enforcement community in Canada, according to the RCMP. Undercover operations during this project saw police purchase approximately 9 kilograms of fentanyl and several kilograms of other illicit drugs over several transactions. These drugs could have been diluted significantly, meaning a much higher drug volume would have been distributed to the streets.

In all, RCMP seized approximately 10 kg of fentanyl, 1.3 kg heroin, 1 kg of methamphetamine and 30 kg of marihuana as well as smaller amounts of carfentanil and cocaine. The street value of the seized drugs is estimated to be $10 million.

Approximately $400,000 in cash was seized as a result of the investigation as well as three vehicles worth approximately $170,000.

The investigation relating to the importation of cocaine resulted in the arrest of two Sunwing Airlines employees working at TPIA. These employees are charged with attempting to import cocaine and trafficking cocaine. The RCMP wishes to thank Sunwing Airlines for their assistance during this investigation. Sunwing’s commitment to safety and security was evident and their cooperation was instrumental in bringing this investigation to a successful conclusion.

Within the RCMP significant support was also received from serious and organized crime units at Toronto West, London and Hamilton Niagara detachments and several support services units as well as the RCMP Liaison Officer in Jamaica.

“Those who traffic in illicit drugs destroy lives and impact the safety and security of our communities. The RCMP and our many partners will continue to work together closely to eradicate those dangers.” said C/Supt. Michael LeSage, Criminal Operations Officer for the O Division RCMP. Project OWoodcraft demonstrates how the efforts of law enforcement agencies, other government departments, and private sector partnerships at a local, national and international level, can work effectively to combat crime.”

Law enforcement agencies work diligently to make our communities a safer place to live, however your assistance in remaining vigilant and informing us of any suspicious activities will help us be even more successful. If you have any information about the trafficking of fentanyl or carfentanil, or wish to report other criminality, you can contact your local police, the Ontario RCMP at 1-800-387-0020, or anonymously through Crime Stoppers at 1-800-222-8477 (TIPS), at any time.