A Scotland bank robbery back in April could be just the latest in a string of similar incidents across southern Ontario. And the Canadian Bankers Association is willing to pay cash for information leading to a conviction.
In five different bank robberies, mostly in March 2018, two people disguised in hoodies often grey or black in colour took money from financial institutions while carrying firearms, according to the victims and witnesses. The robberies occurred in Markham, Foothill, Moorefield, Embro and Scotland.
The West Region Ontario Provincial Police (OPP) crime unit has been collaborating with York Regional Police Service and Niagara Regional Police Service to investigate the robberies under the direction of Detective Inspector Randy Gaynor of the OPP criminal investigation branch.
“The OPP is reminding the public that these suspects are considered armed and dangerous in relation to this active investigation,” reads an OPP statement. “Anyone who may know the identity or the whereabouts of the suspects or who may come into contact with the suspects should not approach them. Instead, contact the police immediately by calling 911.”
Back on Monday, April 6 two people walked into the Royal Bank of Canada (RBC) in Scotland, south of Brantford, wearing disguises: One wore a black hoodie covering his face, a grey shirt and a grey baseball cap. The other person wore a grey hoodie and a dark face covering (see photo above).
A week earlier on March 29 two armed assailants took money from the RBC in Embro, west of Woodstock. One was wearing a grey and black striped sweater with a dark hood covering the face and blue gloves; the other was wearing a red Adidas sweater with a yellow hood, dark face covering and orange gloves.

On March 13 an RBC in Moorefield was robbed of cash by two suspects. Both were wearing dark clothing; one wore a white scarf across his face; the other covered their face with a red bandana and wore a Nike ball cap.

Cash was also taken by armed suspects from a TD bank branch on March 8 in Foothill wearing disguises. One was dressed in a green sweater, dark pants, dark sunglasses and a red bandana face covering; the other was wearing a grey sweater, baseball cap and a white face covering.

The day before in Markham two suspects stole money from the CIBC wearing grey from head to toe. The other wore all black with a grey face covering. 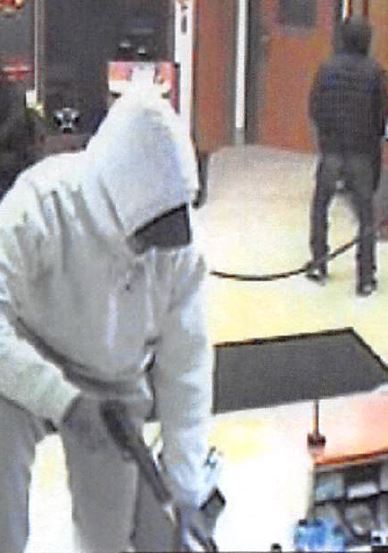 The Canadian Bankers Association has offered a $10,000 reward for information leading to the arrest and conviction of those responsible for these robberies. For more information on the terms and conditions of the reward, contact Malcolm Chivers at mchivers@cba.ca or 416-362-6093, ext 330.
A dedicated tip line has been set up for this investigation. Anyone with information that can assist police is asked to call 1-855-677-4636.