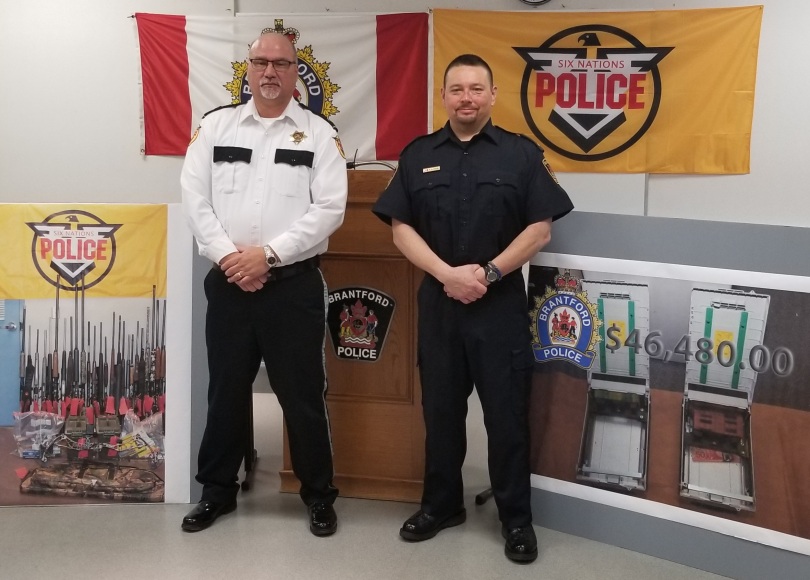 Steven Wade Vanevery, 35, and Shawn Erwin Sandy, 43, both of Ohsweken in Six Nations of the Grand River, are accused of using a stolen pick-up truck to steal ATMs from businesses all across Ontario.

The break-ins targeting ATMs they have allegedly perpetrated since September 2019 were into grocery stores, nail salons, convenience stores and other businesses in Brantford, London, Woodstock, Pelham, Niagara Falls, Hamilton,

Cambridge, Kitchener, St. Catharines, Burlington, Oakville, Fonthill and Guelph. Police estimated that $100,000 worth of Canadian currency had been stolen from the ATMs inside of the businesses and that $180,000 worth of damages has been inflicted on the affected businesses.

The execution of the judicial authorizations led to seizures of $45,000 worth of Canadian currency, a stolen 2015 Dodge Ram pick-up truck and 27 firearms.

Vanevery and Sandy were arrested, charged and held for bail hearings. They are facing more 400 charges.

“It was realized early in the investigation that this would require a strong partnership with Six Nations Police,” added Brantford Police Service Chief Rob Davis. “The outcome speaks to the cooperation and professionalism of the officers from both agencies and our mutual commitment to work together to address crime and keep our communities safe.”