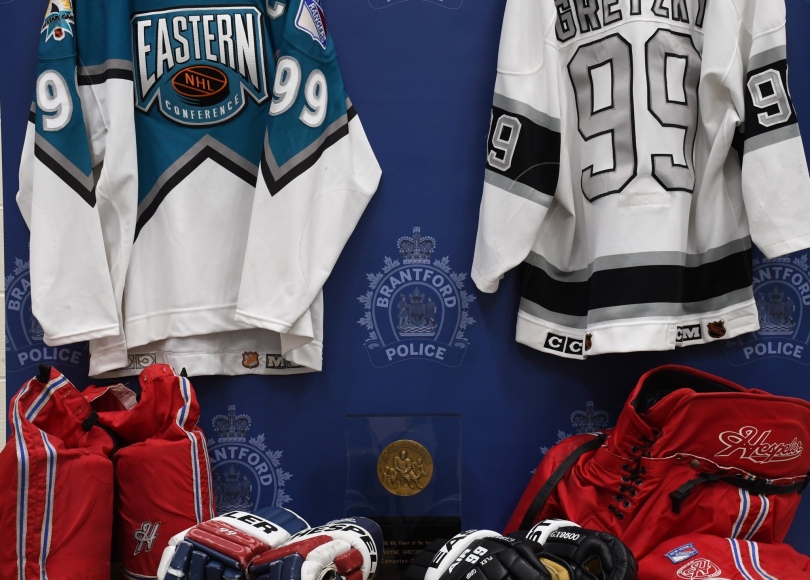 Two people face criminal charges after more than half a million dollars worth of Wayne Gretzky memorabilia was stolen in August.

The Gretzky family contacted the Brantford Police Service in August after finding that pieces of The Great One’s collection was missing from his father’s home on Varadi Avenue in the city’s north end Tranquility neighbourhood.

Brantford police tapped the OPP and the RCMP for help after a local investigation led investigators to believe the missing items may have been sold to collectors across Canada.

A three-month investigation followed, which allowed police to identify specific residences where the stolen property was believed to be located.

On Dec. 8, officers from Brantford officers, the OPP and RCMP, with assistance from Halton Regional Police Service, executed search warrants at five homes in Ontario and Alberta.

Officers recovered various items of Wayne Gretzky sports memorabilia, including multiple game sticks, hockey gloves, pants, jerseys and a player-of-the-year award. The estimated value of the recovered property is believed to be more than $500,000 (U.S).

Brantford police has asked people kindly respect the wishes of the Gretzky family and refrain from attempting to contact Walter Gretzky for interview or comment.

“On behalf of our family, I would like to thank the Brantford Police Service, the Ontario Provincial Police, and the Royal Canadian Mounted Police for everything they have done regarding this investigation,” said Glen Gretzky, Wayne’s brother. “I would like to sincerely thank every member of the team; the professionalism, dedication and support they have shown has been greatly appreciated.”