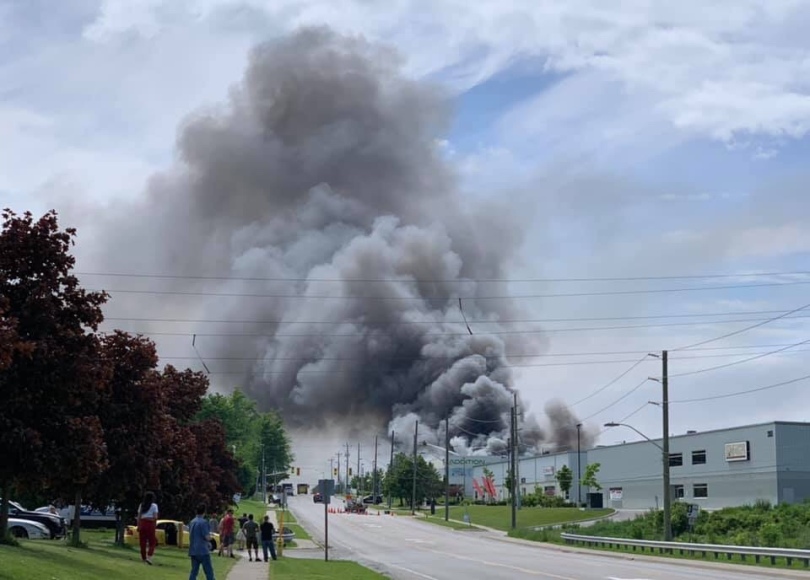 The Ministry of the Environment (MOE) is warning residents to avoid the scene of an industrial fire at a rubber factory on Henry Street in Brantford, which is now under control, especially if you have respiratory issues.

After recommending they close and people leave the area while firefighters battle the blaze at North West Rubber, 321 Henry St., the Brantford Fire Department says businesses can safely reopen.

Fire crews remain on scene extinguishing hot spots, which may create light smoke in the area.

The MOE was called to the scene to measure and monitor air quality within the area. While contaminants were found in the plume of the fire (billowing smoke), they measured well below the ministry’s emergency screening values for public exposure. At the levels currently measured, the MOE does not anticipate health impacts to the public from short-term exposure to the plume from the fire.

The public is still advised to avoid the area and to keep windows and doors shut and HVAC systems off. In particular, those with respiratory issues should avoid the area.

At 6 a.m. Sunday, Brantford Fire Department was called to the scene of the large industrial fire. Firefighters responded with four pumpers and an aerial truck, supported by Brantford Police Service, Brantford Brant Paramedics and the County of Brant Fire Department. By 8 a.m., first responders reported that the fire was contained to the storage yard, where large amounts of rubber mats and wooden pallets were burning. No injuries were reported.

“The city is extremely grateful for the brave men and women who make up our exemplary fire department, Brantford police, Brantford Brant Paramedics, and to all of the first responders from our neighbouring municipalities, including the County of Brant and Six Nations Fire departments, who assisted in fighting and containing the fire all day today,” said Brantford Mayor Kevin Davis.

Large dark clouds of smoke could be seen across Brantford as the fire raged all day Sunday.