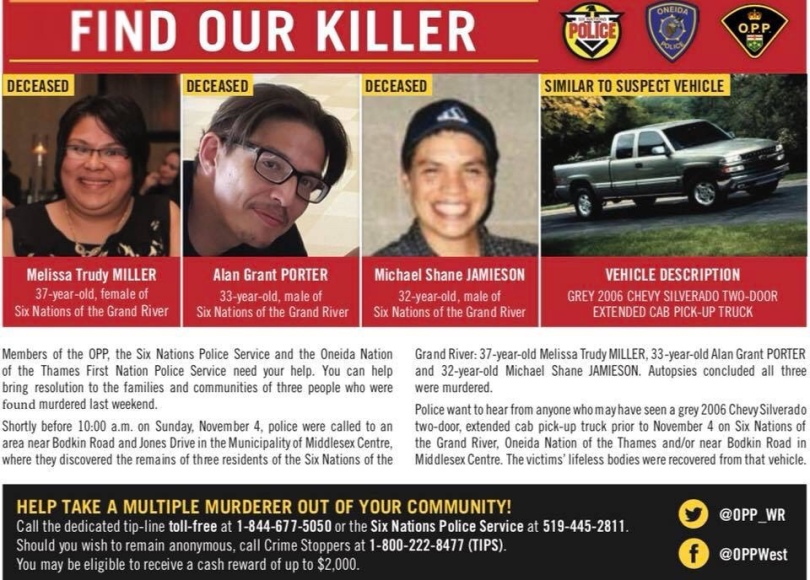 The accused, 36, was arrested by the OPP on Friday and charged with three counts of accessory after the fact to murder.

On Sunday, Nov. 4, shortly before 10 a.m., officers from the Middlesex County OPP detachment and the Oneida of the Thames Police Service responded to a call near Bodkin Road and Jones Drive in the Municipality of Middlesex Centre. Police were alerted to the presence of a grey pickup truck in a field on private property off Bodkin Road.

Three residents of the Six Nations of the Grand River were found deceased near the pick-up truck.

They were identified as 33-year-old Alan Grant Porter, 32-year-old Michael Shane Jamieson and 37-year-old Melissa Trudy Miller. Police revealed Miller was seven months pregnant when she died. The pickup truck had been stolen and recovered with the victims’ bodies.

The bodies were found near where Douglas Hill, 48, of Six Nations was found deceased more than a year ago in Oneida Nation of the Thames. Miller, it turns out, had been in a relationship with Hill, according to media reports. Charges were laid against four people regarding his death, but have since been withdrawn. A teenage female had been charged with second-degree murder.

The OPP and Six Nations Police held a press conference with relatives of the victims on Thursday, Nov. 16 in Six Nations of the Grand River to update the public and ask for any help they can provide in moving the investigation along.

The accused was held for a show cause hearing on Saturday in London, where she was remanded into custody. A future court appearance at the Ontario Court of Justice in London is pending.

Periodic road closures will occur for several days as the investigation continues on Fourth Line at the intersection of Tuscarora Road, as well as Onondaga Road at Fourth Line.

Six Nations landfill remains open, but will only be accessible from Onondaga Road.

Police continue to appeal for anyone with information about the victims or their activities leading up to their deaths and the discovery of their bodies to contact the toll-free tip line at 1-844-677-5050, the Six Nations Police Service at 519-445-2811 or Crime Stoppers at 1-800-222-8477 (TIPS). They also want to hear from people who may have any information or may have seen a grey 2006 Chevy Silverado pickup truck on Six Nations of the Grand River or in the area of Bodkin Road or anywhere between the two locations before the bodies were discovered.