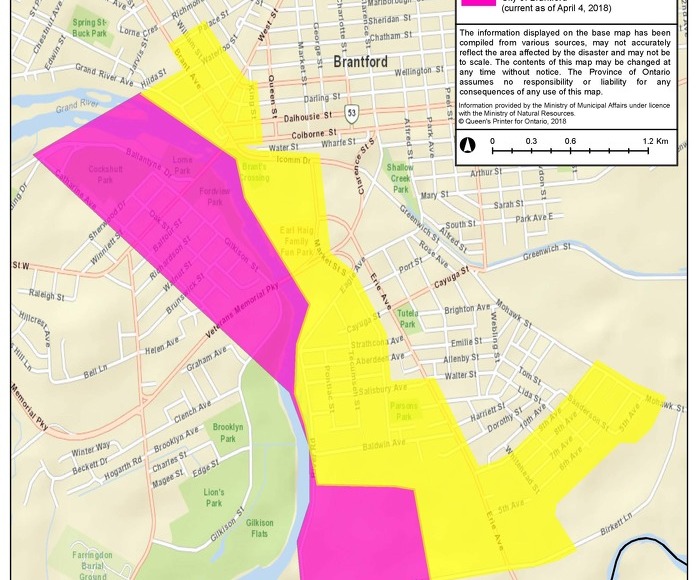 The provincial government has expanded the area of Brantford allowed to apply for its disaster recovery assistance program following flooding along the Grand River on Feb. 21.
Ontario’s Minister of Municipal Affairs, Bill Mauro, activated the program in Brantford on Feb. 27, but announced on Thursday that a wide swath of West Brant, west of the Grand River along Gilkison Flats, and the flood plain south of Baldwin Avenue in Eagle Place will now also be covered by the program. The new area of Eagle Place covered by the disaster assistance program follows River Road south around to Birkett Lane to the east and ends at the dike trail built to protect homes beyond it.
“Expanding the original activation area will allow more residents who were affected by the flood to submit claims for assistance,” read a statement released by Mauro on April 12.
Due to the expansion of the activation area, the deadline to submit claims for applicants from Brantford is extended to Friday, Aug. 10, 2018.
A deep thaw and heavy rains between Monday, Feb. 19 and Wednesday, Feb. 21 led to flooding that damaged homes along the Grand River.
Parts of Eagle Place and along Grand River Avenue near the Lorne Bridge were evacuated due to an ice jam that was released, sending water surging into the city early on Feb. 21. The water level rose several metres overnight due to the ice jam estimated to span two miles The City of Brantford declared a state of emergency that lasted for five days. The evacuation was voluntary.
The water and ice rose high enough to come over the retaining wall on River Road built about 40 years ago to prevent floods such as the one that did considerable damage to communities, particularly Galt (now Cambridge), in 1974.
Homeowners, small businesses and not-for-profit organizations that experienced property damage or loss as a result of this disaster may be eligible to receive help with emergency and recovery expenses. The program provides reimbursement of expenses incurred but may also offer interim payments to those who need upfront help.
The program applies to a primary residence and its basic contents, or to main small business premises, farms and not-for-profit organizations. Damage from sewer backup is not eligible under the program except under special provisions for low-income households.
More information and detailed program guidelines are available at ontario.ca/DisasterAssistance or call toll-free 1-844-780-8925.